This article describes how to parse log message via “Post-Process”. It illustrates the logic behind Post-Process action.

Get relevant information from logs

Log files contain a lot of information. In most cases only a small part of the log message is of actual interest. Extracting relevant information is often difficulty. Due to a variety of different log formats a generic parser covering all formats is not available.

Good examples are firewalls. Cisco PIX and Fortigate firewalls both use syslog for logging.. But the content of their respective log messages are very different. Therefore a method is needed to parse the logs in a generic way. Here Post-Process action of Adiscon’s MonitorWare comes into play.

Post-Process action provides an editor for creating a log format template. A template consists of as many rules as necessary to parse out the relevant information.

In order to parse out information it is vital to know the exact structure of the message. Identifying the position of each relevant item is essential. Assuming for auditing purposes the following items are needed:

In order to extract the information let us examine each item within the message. Splitting the message makes it easier to explain. So here we go.

Pos = Position of the character.
*p  = Points to the position the parser stands after parsing the rule.
Log = Message subdivided into its characters.
Pro = Property. In the term of Adiscon a property is the name of the item which is parsed out.

Note that at beginning of the parse process the parser’s pointer points to the first character. Each parse type starts parsing at the current position of the pointer.

Parsing out a Timestamp

The first identified item is a so called Unix/Timestamp. It has always a length of 15 characters. ‘UNIX/LINUX-like Timestamp’ parse type exactly covers the requirement to parse this item. Therefore insert a rule and select ‘UNIX/LINUX-like Timestamp’ type. This rule parses out the timestamp and moves the pointer to the next character after the timestamp. Name the property ‘u-timestamp’ [1]. 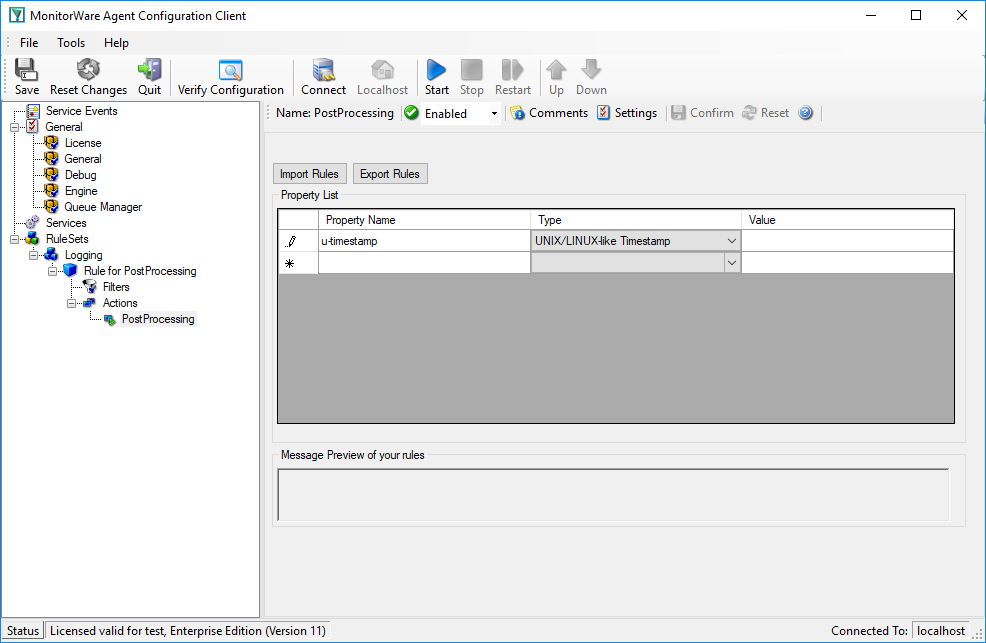 Next item is the IP address. Note that after the timestamp follows a space and then the IP address. Therefore insert a ‘Character Match’ rule with a space as value. Select the ‘Filler’ [2] property for this rule. ‘Character Match’ requires a user defined value. This parse type compares the given value with the character at the current position of the message. The character has to be identical with the given value otherwise the parse process will fail. After applying this parse type the parse pointer is moved to the position immediately after the given value. In our sample this is the start position of the IP Address (Pos 17).

After that the address can be obtained. Place in a ‘IP V4 Address’ type. This type parses out a valid IP regardless of its length. No need to take care about the characters. Select ‘Source’ property or name it to whatever you prefer. The parser will automatically move the pointer to the position next to the address. 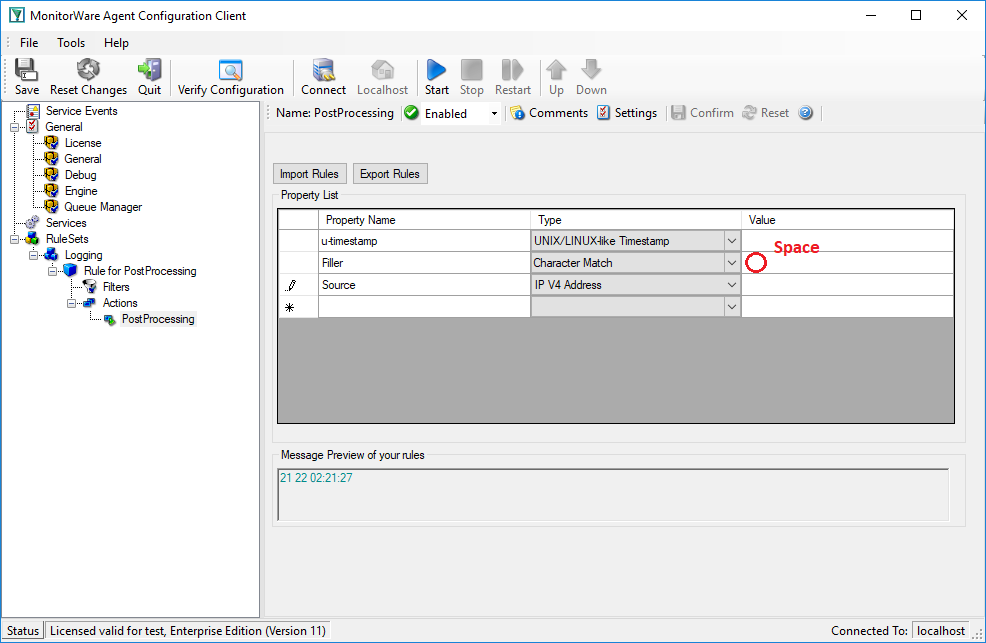 Note the value of ‘Character Match’ rule is a space.

A colon is immediately behind the syslogtag. So all characters between the percent sign and the colon are needed. The ‘UpTo’ type can do this job. Insert an ‘UpTo’ rule. As value enter ‘:’ (without the quotes) and select the syslogtag property. Note that after parsing the pointer stands on the first character of the ‘UpTo’ value. 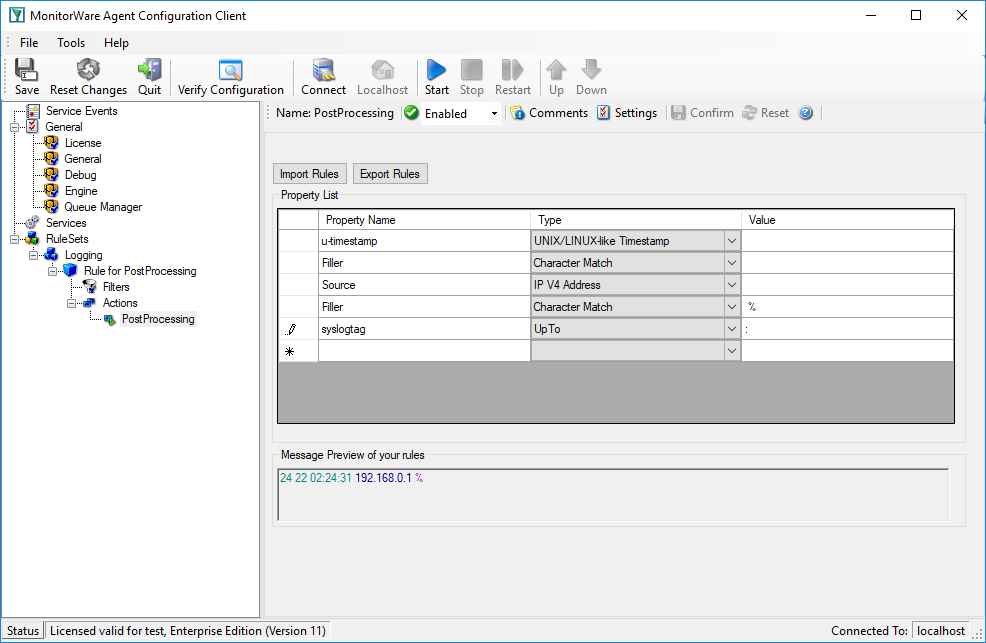 Important: It points to the colon not to the blank.

The next interesting item is the MessageID. Move the pointer to start position of the MessageID part. Again, do this by using a ‘Character Match’ rule. Keep in mind that the pointer points to the colon. Behind the colon is a space and then the MessageID starts. Thus, the value of the rule has to be ‘: ‘.

MessageID consist of numbers only. For numeric parsing the ‘Integer’ parse type exist. This type captures all characters until a non-numeric character appears. The pointer is moved behind the number. Note that numeric values with decimal dots can not be parsed with this type (because they are not integers). This means trying to parse 1.1 results in 1, because the dot is a non-numeric value. 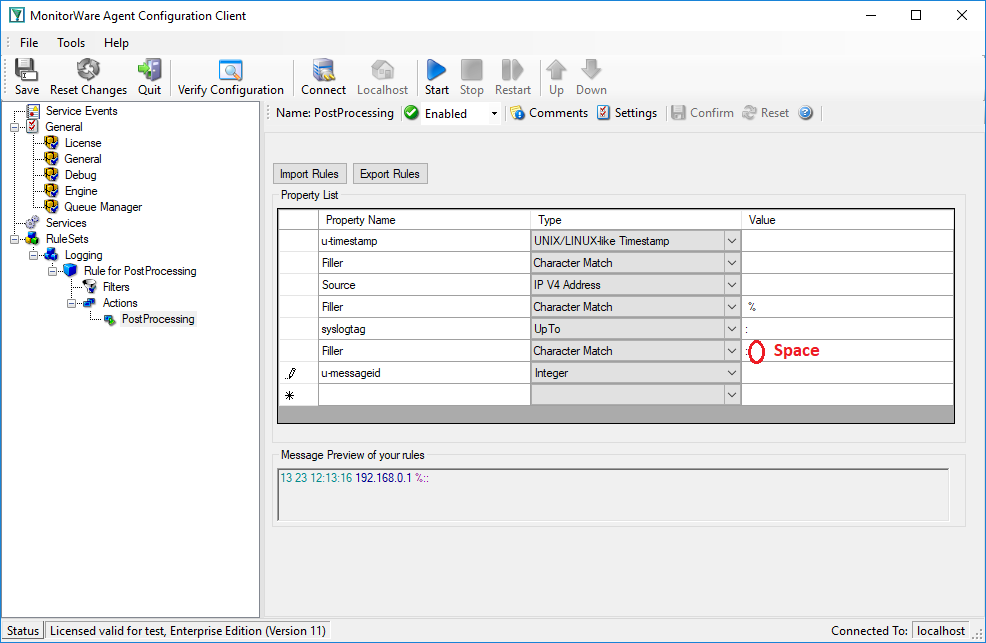 Find the username and status

Looking at the remainder of the message indicates that the username is not immediately after syslogtag. Thankfully though, the username always starts with ‘user=’. Consequently the ‘UpTo’ type can be used to identify the username. To get the start position of the username we have to use ‘UpTo’ together with ‘Character Match’. Remember that ‘UpTo’ points to the first character of the given value. For this reason the ‘Character Match’ rule is necessary.

After locating the start position of the username ‘Word’ parse type can be used. ‘Word’ parses as long as a space sign is found. Enter ‘u-username’ as property. 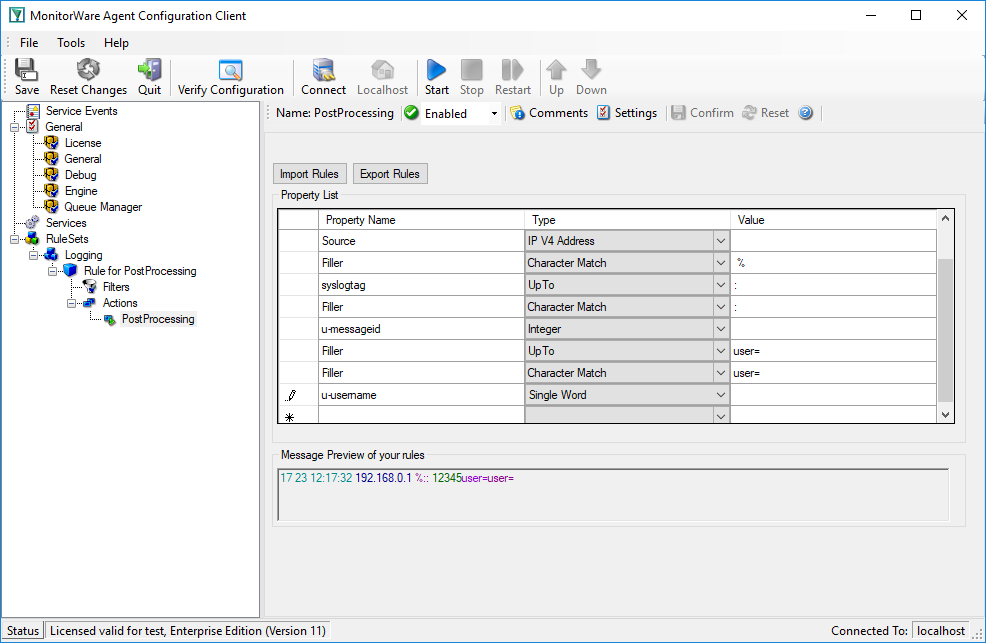 Notice: After parsing a word the pointer stands on the space behind the parsed word.

The steps to get the status are very similar to the previous one. 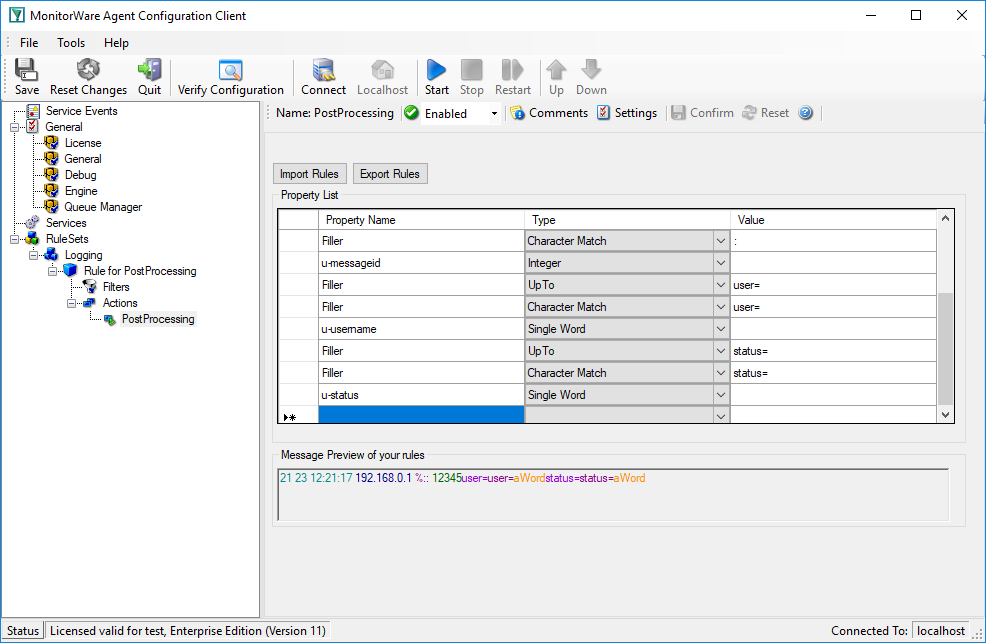 One item of interest is left. The last part of the message contains additional information. It starts after ‘msg=’. So the combination of ‘UpTo’ and ‘Character Match’ is used to go to the right position. All characters after ‘msg=’ until the end of the message are interesting. For this purpose the ‘Rest of Message’ parse type is available. It stores all characters from the current position until the end of the message. This also means that this rule can only be used once in a template and is always the last rule. 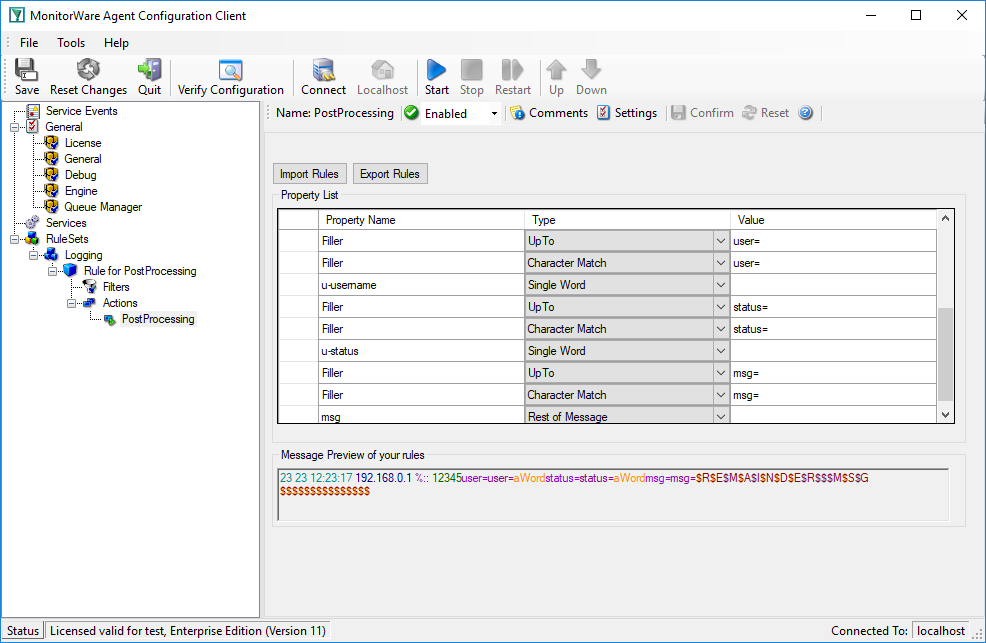 What happens if the parser fails?

If a rule does not match processing stops at this point. This means all properties of rules which were processed successfully until the non-matching rule occurs are available.

Let’s assume the fourth rule of the following sample does not match. 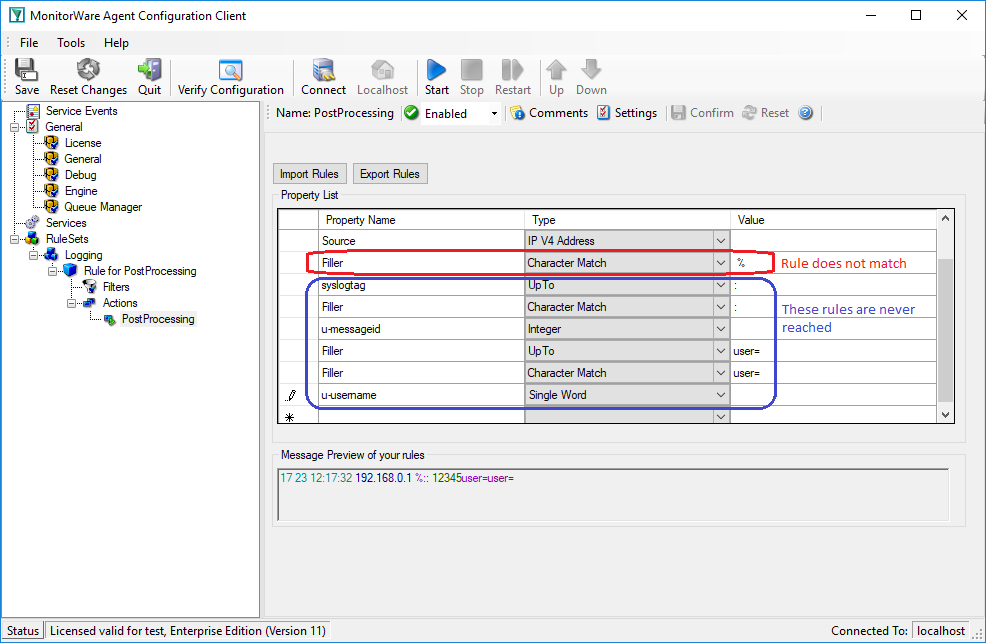 The first three rules were processed successfully. Therefore u-timestamp and Source are available. But syslogtag and u-messageid are always empty due to the parser never process this rules.

[1] Using the “u-” prefix is recommended to differentiate between MonitorWare-defined properties and user defined one. It is not required, but often of great aid. A common trap is that future versions of MonitorWare may use property names that a user has also used. MonitorWare will never use any name starting with “u-“, so the prefix also guards against such a scenario.

[2] Filler is a predefined property which acts as a bin for unwanted characters. Essentially, the data is simply discarded.

Please Note: There’s also a StepByStep Guide available which describes how the PostProcessAction works, you can find it here.